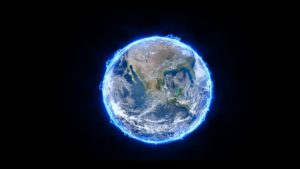 Geopathic Stress can be caused by natural phenomena such as underground streams, geological faults and cavities as well as by changes introduced by man such as railway cuttings, pylons and quarries.

Geo comes from the Greek word for earth and Pathic from the Greek word pathos meaning to suffer or cause disease.  The Earth has a natural energy field which vibrates at 7.83 Hz.   If this is disrupted or distorted it can cause harmful radiation – Geopathic Stress – to emanate from the Earth’s surface.

Geopathic stress has been found to be the only common factor in most serious and long term illnesses, psychological conditions, and when babies are born with defects.  This was confirmed by the medical profession over 75 years ago. The symptoms can be more severe if a line is affecting your bed.

Considerable research has taken place in Germany over the last 75 years.  Otto Bergman – a professor at the university of Vienna tested 985 people over two years.  The Test: People had to sit in a Geopathically Stressed place for 10 minutes.  The test subjects were given a very thorough medical examination, before and after the test.  The examination included blood sedimentation tests, measuring of electric condulance of certain muscle points of blood pressure.  As well as: heartbeat, breathing, skin resistance and blood circulation.  To eliminate a ‘placebo’ effect the tests were organised in a double-blind fashion.  Neither the doctor nor the test subjects knew whether they had been sitting in a Geopathically Stressed place or not.

462,421 measurements were taken in 6,943 individual tests.  Although the subjects were exposed to GS for only a few minutes, the harmful effect could be registered in most cases.  “One can imagine the dire consequences which exposure to GS over many years could do” wrote Natural Medicine.

Some German builders employ dowsers to guarantee that all essential rooms are free from Geopathic Stress.  In parts of Austria planning permission will not be given for many types of building site unless the plot has been dowsed for Geopathic Stress.

As an Advanced Feng Shui Practitioner I am able to detect and transform these Geopathic Stress lines into nourishing lines using Earth Acupuncture.  This should allow you to sleep more peacefully and allow your immune system a chance to return to optimum performance.